Published by the Institute for Energy Economics and Financial Analysis (IEEFA), the report also cautions that the risk to South Africa is further amplified by the fact that its exporters are more dependent on a single import destination, India, than is the case for other major thermal coal exporting nations.

In 2018, India was the destination for 48% of all South African thermal coal exports, leaving South Africa’s export industry highly exposed to just one nation, authors Simon Nicholas and Tim Buckley state. In the first half of 2019, the figure rose to 60%.

“The last fiscal year saw the expansion of thermal power capacity in India slow to the lowest level in a decade as a major renewable-energy expansion continued. India’s coal Ministry is now preparing a new plan to cut coal imports by one-third, or around 85-million tonnes, by 2024.”

Titled ‘South African Coal Exports Outlook: Approaching Long-Term Decline’, the report describes the global seaborne thermal coal market as being “over-supplied” and states that the outlook is for slowing demand in the longer term and heightened competition.

Nicholas and Buckley forecast that major coal producing nations, such as China and India, will seek to squeeze out coal imports, while Japan and South Korea will increasingly turn towards renewable energy for reasons of cost, energy security, air pollution and carbon emissions.

“The Richards Bay Coal Terminal may have to get used to the idea that an increasing proportion of its annual capacity will become stranded. With a capacity of 91-million tonnes per annum, Richards Bay operated with almost 20% spare capacity in 2018.”

The authors also note that coal prospects in Pakistan will be limited by concerns over the economic impact of coal imports, while South Korea is considering the progressive retirement of up to 20 coal-fired power plants as it plans to rely on renewables and liquefied natural gas in the long term.

“Any expectation that the rest of Africa will provide a major coal export opportunity for South Africa as the continent develops are likely to meet with disappointment. With renewable energy increasingly the technology that is replacing expensive diesel-fired generation, or bringing power to off-grid areas, the opportunity for a major coal capacity expansion across Africa seems to have gone.”

The IEEFA report also stresses that the shift from coal to renewable energy is unavoidable and that a lack of planning will result in a “chaotic transition with negative social and economic impacts”.

“Policymakers in South Africa need to prepare for the ongoing technology driven transition away from coal or face the inevitable social and economic consequences,” the authors state.

“It won’t happen overnight, but key trends in global markets show new energy technology is replacing coal-fired power faster than most predicted. By 2030, new wind and solar will be cheaper than running existing coal- or gas-fired plants virtually everywhere in the world.”

Likewise, major mining companies are starting to move out of coal, with global mining groups such as Rio Tinto, South32, BHP Billiton and Anglo American having either withdrawn from the seaborne thermal coal market, or having indicated that they are considering a withdrawal. 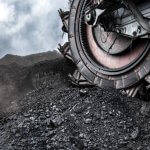